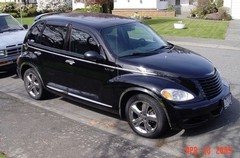 Bought new in late 2003, I have added about $1000.00 in bling to the exterior. It is a loaded GT with the 235 HP turbocharged 2.4L engine. As of April 2009, I have 57,xxx Km on it and have never had one problem. The only drawback to the vehicle is that it has a very poor (wide) turning circle apparently due to the retro style of the front end, so a Chrysler mechanic told me. It gets respectable gas mileage as long as I don't overuse the turbo but it really steps out when needed. Too bad Chrysler has chosen to discontinue the vehicle.

On Oct 5th, 09 I decided to sell this car to purchase a 2009 Toyota Prius, used, with only 6700 miles. I no longer need the versatility of the Cruiser nor the relatively poor turbo gas mileage.

Roll with the hills

In hilly terrain, allow at least a few seconds between your ... ...